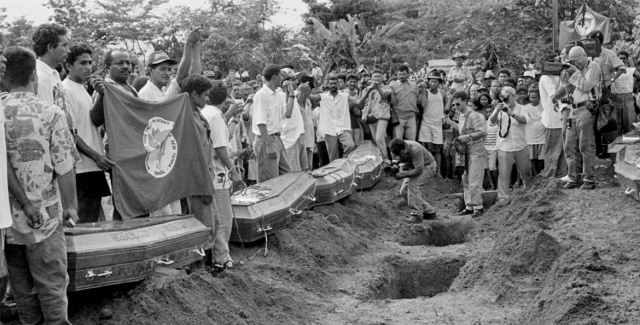 “Monstrous, a lot. But nothing more monstrous than man.”

The images of the burning Amazon from last summer caused quite a stir throughout the world. The attack by the Brazilian agribusiness on the world’s largest contiguous jungle, which was strongly supported by President Bolsonaro, not only threatens the planet’s “green lung”, but also puts the peoples living there and their traditions dating back thousands of years at risk. After the productions “Orestes in Mosul” in the former capital of the Islamic State and the Jesus film “The New Gospel” in the southern Italian refugee camps, Milo Rau and his team travel to the Amazon Basin in Brazil to conclude their “Trilogy of Ancient Myths”. In the federal state of Pará, the government has fuelled land conflicts for decades through large-scale mining projects, the construction of dams and the state promotion of monoculture soy farming. In a new project which will take place on an occupied piece of land in cooperation with indigenous people, activists and actors from Europe and Brazil, the tragedy of “Antigone” will be retold: as a bloody encounter between traditional wisdom and global turbo-capitalism, as an epos of the struggle of mankind against its self-inflicted decline into greed, delusion and hubris.

It is probably due to the archetypal simplicity of the plot that no other classic tragedy has experienced as many adaptations as Sophocles’ “Antigone”, written in 472 B.C.: Antigone buries her brother Polynices even though King Creon has forbidden the burial as Polynices is considered an enemy of the state. According to the philosopher Hegel, the conflict between Antigone and Creon can be read as a dispute between the traditional, divine law and the rational, modern state. To the philosopher Judith Butler, however, Antigone’s destabilisation of the existing symbolic order is much more radical: she undermines it from its utopian exterior, from a fundamentally different concept of human coexistence, of the living and the dead, of man and nature.

After having realized his political and trial-based projects (“The Congo Tribunal”, “General Assembly”) and narrative and representative pieces (“The Europe Trilogy”, “Compassion”, “The Repetition”), Milo Rau has been focusing on the founding myths of modern society for some time now. In Mosul, which was the capital of the Islamic State until two years ago, last April, Rau and his team created “Orestes in Mosul” (2019) in collaboration with Iraqi and European actors based on the “The Oresteia” by Aeschylus. In the middle of the war zone, the ensemble posed the possibly most important question of all civilizations: how to end tragedy, how to forgive and bring about a new beginning. In the “The New Gospel” (2019/20), in which Rau worked in and around the European Capital of Culture Matera with refugees, non-professional and professional actors from the Jesus films by Pasolini and Mel Gibson, he recreated a social-revolutionary message for the 21st century – and at the same time documented the struggle for the rights of migrants who are working on tomato plantations and being exploited by the Mafia.

The project “Antigone in the Amazon” concludes his work on the great myths and issues of humanity, and just like in the previous projects, the central question is: which actors, what kind of political constellation allows this text to speak to us about the conflict between  traditional and modern societies in a new way? That is why, for the production of “Antigone”, the director and his team travel to the Brazilian state of Pará, where state-sponsored mining projects and monoculture soy farming are spreading into the forests of the Amazon, seemingly eating up the natural environment as they do. In collaboration with MST – Movimento dos Trabalhadores Sem Terra, the world’s largest landless workers’ movement – they are creating an allegorical play about the violent devastations and displacements caused by the modern state, which places private property – and accordingly, worldwide trade and speculation – above the traditional right to land.

The battle of words between Antigone and Creon, but also the choral passages, which have been reinterpreted for 2500 years, acquire a new meaning: the liberal world order comes into contact with the holistic cosmology of the indigenous peoples of Brazil, who cultivate a progressive approach to nature in the age of an impending climate collapse. “Monstrous, a lot. But nothing more monstrous than man”: Sophocles’ critique of human hubris, of the ideology of exploitation and feasibility, the question of the justification of state violence and civil resistance are also reflected in the cast itself, in the personal stories of the actors cast in the play and in the debates that develop amongst them. As in “Orestes in Mosul” or “The New Gospel”, “Antigone in the Amazon” also brings European and local as well as non-professional and professional actors together.

Antigone is played by the indigenous actress Kay Sara, who grew up in a Tukano village in the Amazon. The role of Ismene is performed by a black activist who grew up in a quilombo, a traditional settlement founded by escaped black slaves. The chorus is made up of local activists from the landless workers’ movement, who defend their right to the use of the land against the big landowners and speculators in the Amazon. In a parallel to Polynices’ revolt against the state in the mythological background to Antigone, “Antigone in the Amazon” begins with the 1996 massacre of Eldorado do Carajas, in which 19 landless persons were shot by police on a highway, with the dead Polynices of the Greek myth finding his counterpart in a murdered activist. Creon is played by Celso Frateschi, an established actor, director and leftist politician from the white upper class in Sao Paulo – not by, for example, a right-wing, politically motivated criminal, but by someone who grapples with his own position of power. The production itself takes place in a location where, for many generations, the expanding Brazilian state has run up against the indigenous cultures in bloody clashes. Haemon, the son of Creon and Antigone’s fiancé, is played by the Belgian actor Arne De Tremerie, who – as the director’s alter ego – plays the role of the European – prisoner of his privileges – alongside the doomed Antigone. Finally, the blind seer Tiresias, who predicts Creon’s self-destruction, is performed by a living legend of Latin American theatre: 82-year-old Zé Celso, the inventor of a Brazilian theatre based on indigenous traditions.

“Antigone in the Amazon” will be premiered and documented in November 2020 in the Brazilian state of Pará. The production culminates in a re-enactment of the massacre of Eldorado do Carajas, in which the events at the scene of the crime are reconstructed and re-enacted together with the survivors. On May 16, 2020, Antigone actress Kay Sara and Milo Rau will open the Wiener Festwochen with the speech “Against Integration”. Parts of the production will be shown for the first time in Europe in January 2021, as a video installation in the exhibition “School of Resistance” at the Akademie der Künste in Berlin. The theatre performance “Antigone in the Amazon” will have its premiere at NTGent in April 2021, and will then go on tour and also return to Brazil.

“Antigone in the Amazon” (re-enactment and video installation) is a production of the International Institute of Political Murder (IIPM) in collaboration with the Movimento dos Trabalhadores Sem Terra (MST) and NTGent, with support from the Pro Helvetia programme COINCIDENCIA – Swiss & South American Cultural Exchanges, the German Federal Cultural Foundation and the Goethe Institut São Paulo.

“Antigone in the Amazon” (theatre performance) is a production of NTGent in collaboration with MST and IIPM.