Warning: sizeof(): Parameter must be an array or an object that implements Countable in /www/htdocs/w00bb9f2/wordpress/wp-content/themes/iipm/index.php on line 16

For The Interrogation Édouard Louis and Milo Rau work together for the first time: Louis as actor, Rau as director – with a brand new play they have written for this occasion.

The French writer Édouard Louis and the Swiss director Milo Rau have long been friends. It is a friendship born out of their joint search for an art of the real. Louis wrote about Milo Rau’s play Family: “The core of theatre is the same as in literature: to show what is difficult to show. Theatre is not a safe space.” Now, Édouard Louis and Milo Rau are working together for the first time, writing and creating a new show, performed by Louis and directed by Rau.

The Interrogation explores the thin line between acting, living and surviving, and confronts us, in a direct yet delicate way, with a barrage of questions: Can art change a life? What position do we take in society today? The Interrogation will premiere at the Kunstenfestivaldesarts Brussels on May 27 and then go on tour. This unique collaboration is also conceived to be broadcasted live online on each performance night, simultaneously accessible in Brussels and elsewhere.

All info, dates & a talk with the makers here.

A Jesus film, a campaign for refugee rights, a new way of producing and distributing films and tomatoes : “The New Gospel” won the Swiss Film Award.

“We are striving for a global movement with this film – it concerns all of us,” says Cameroonian activist Yvan Sagnet, who plays the role of Jesus Christ in The New Gospel. “I do it through the struggle, others do it by consuming consciously, by writing about it… It should be normal to refuse something that is known to involve slave labour.” After a successful launch online in Germany, Belgium, Holland and, over Easter, also worldwide, The New Gospel has now come to the big screen for the first time since its international premiere at the Venice Film Festival and is parallely released on dvd and blueray.

The film, which was awarded the Swiss Film Award 2021, promotes NoCap products, which are fairly produced by Yvan Sagnet and are now available in more than 100 supermarkets in Germany, Austria and Switzerland. In the parallel fundraising campaign, more than 16,000 euros have already been collected. Fair and sustainable agriculture is possible!

What is Global Realism?
A deep look into IIPM’s artistic work

Two new books on the work of Milo Rau and the IIPM have been published.

What are the problems and the possibilities of global solidarity in art? What will theatre look like after the coronavirus? In two publications – Vers un Réalisme Global (Towards Global Realism) and Grundsätzlich unvorbereitet (Basically Unprepared) – Milo Rau and IIPM report on the methods of their work and provide insight into their production methods in conversations, essays and columns. “The sensation of having access to a thought in motion, capable of accepting the hazards of the present and making them the origin of new actions, is most stimulating,” one critic writes.

“One always hopes for this living moment in which the order of perception would be interrupted,” writes Milo Rau in his epilogue to the collected writings of Julian Beck, with Judith Malina, one of the founders of the mythical “Living Theatre” – one of the main influences on IIPM’s work. The book will be published in May and presented at Berliner Theatertreffen.

La Clemenza di Tito
On the threshold of post-opera?
“The uprising of the masses has finally reached the opera”, a critic wrote after the premiere of Milo Rau’s version of Mozart’s Clemenza di Tito in Geneva. Now the film version of the opera is broadcasted online.

“It is undoubtedly a landmark production,” wrote a critic after seeing Mozart’s final opera Clemenza di Tito in Milo Rau’s “radical’ staging” at the Grand Théâtre in Geneva last February. “The challenge will be to propose other visions in other operas. The challenge is also to know whether we are on the threshold of post-opera – and therefore spectators of the end of our beloved art.” Unfortunately, the performances planned for May at the Wiener Festwochen have had to be cancelled due to the coronavirus pandemic.

The film version of the opera can be streamed here.

Worldwide release of ‚THE NEW GOSPEL‘ (Milo Rau) April 1 to 4, 2021: worldwide release (online) of ‚The New Gospel‘, tickets (8 euros) at www.ntgent.be, subtitles in Dutch, French, Italian and English.   After the premiere at Venice Film Festival, the successful release in Germany, the upcoming release in Switzerland on the 1st of April, […]

“The Future of Cinema”: Special international Release of “The New Gospel” 1-4 April

April 1 to 4, 2021: worldwide release (online) of ‚The New Gospel‘, tickets (8 euros) at www.ntgent.be, subtitles in Dutch, French, Italian and English.

After the premiere at Venice Film Festival, the successful release in Germany, the upcoming release in Switzerland on the 1st of April, numerous nominations like the Swiss Film award for Documentary of the Year, IIPM is proud to announce the worldwide release of THE NEW GOSPEL.

What would Jesus preach in the 21st century? Who would his apostles be? With ‚The New Gospel‘, Milo Rau and his team return to the origins of the gospel.


The protagonist is the Cameroonian activist Yvan Sagnet, the first black Jesus in European film history. He himself works on a tomato farm in 2011 when he decides to revolt against the exploitation of rural workers in southern Italy. For the film, he revisits the largest refugee camp near Matera, the city in southern Italy where Pier Paolo Pasolini and Mel Gibson previously filmed the life of Jesus. Sagnet finds his apostles there, and together with them sets up the „Rivolta della Dignità”, the Revolt of Dignity.


Numerous refugees, activists and citizens of Matera, the 2019 European Capital of Culture, collaborated on „The New Gospel,“ as did Marcello Fonte (European Film Award for Best Actor 2018), Enrique Irazoqui (Jesus in Pasolini’s „Il Vangelo secondo Matteo“), and Maia Morgenstern (Mary in Mel Gibson’s „The Passion of Christ“). Narrated by and with the songs of Vinicio Capossela.

„What makes me most happy about this film is that it has had a real effect,“ says director Milo Rau. „As a result of our rebellion, around Matera the first houses have been founded where protagonists who were homeless now live in dignity. And all with the support of the Catholic Church!“

The Revolt of Dignity created an international ongoing political campaign and network supporting the initiatives involved in the film via a fundraising and marketing campaign promoting fair-trade products and a sustainable relationship to local activists.

One of these projects is the House of Dignity, which aims to enable autonomous working and living structures for around 30 migrant workers in Southern Italy, partially sponsored by GEA/Waldviertler. The products from the partner associations can be bought in supermarkets all over Europe now, another effect of the campaign. You can support the projects via: https://nocap.oeko-und-fair.de/

Join us for a special event on 4th of April at 22:00, CET, in a collaboration with the Segal Theatre Center, New York: an international panel discussion the US release of Rau’s film The New Gospel. With Milo Rau, Yvan Sagnet, moderated by Lily Climenhaga and Frank Hentschker.

“The New Gospel” will be released on 1 April in Switzerland. If the epidemiological situation allows, the film will be shown in Swiss cinemas; in any case, there will be a parallel digital cinema release on the official movie website. The Swiss cinemas will share in the streaming revenues. In Germany, the film will be available for streaming until 17th of April.
https://dasneueevangelium-film.ch/
https://dasneueevangelium.de/ 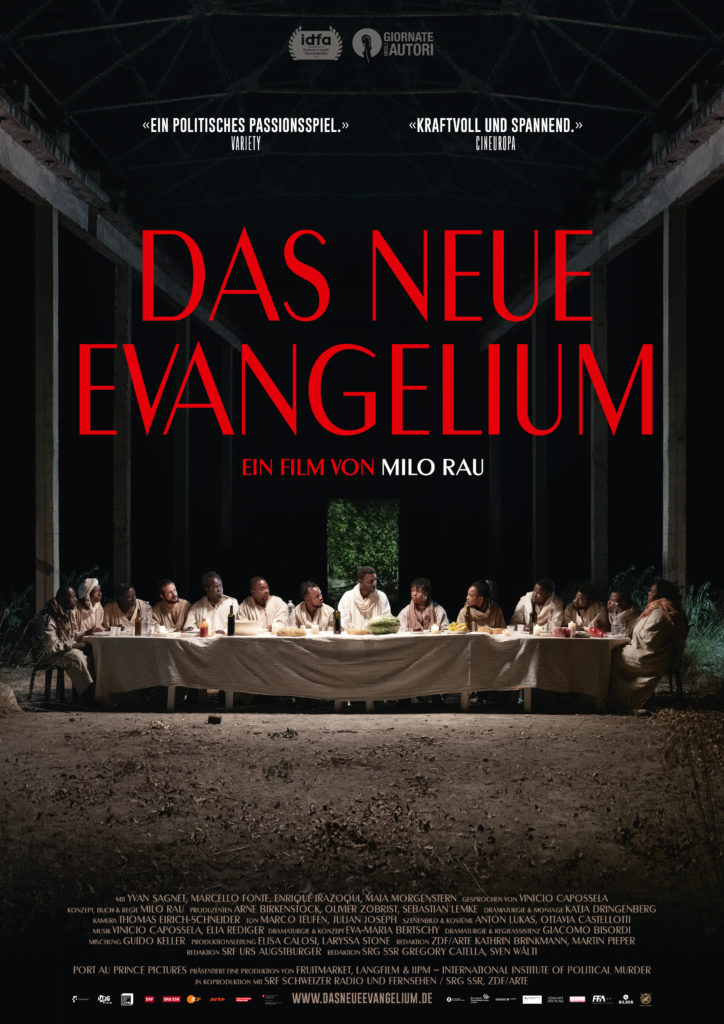 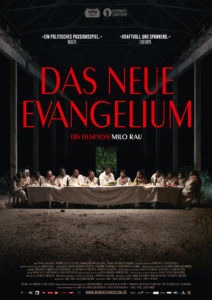 Warning: sizeof(): Parameter must be an array or an object that implements Countable in /www/htdocs/w00bb9f2/wordpress/wp-content/themes/iipm/index.php on line 16

„ORESTES IN MOSUL. THE MAKING OF“ AM NIEDERLÄNDISCHEN THEATERFESTIVAL UND „DAS NEUE EVANGELIUM“ AM FILMFESTIVAL VENEDIG